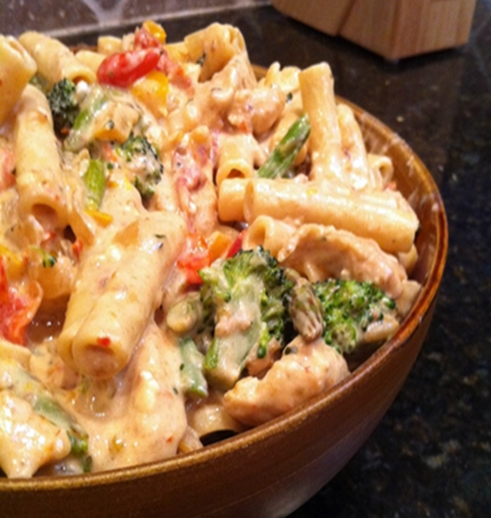 Cook your pasta and let it drain. Sprinkle the chicken breast with salt and pepper. Heat 1 tbsp. oil in a skillet over medium heat and cook chicken until done and golden on all sides. Remove and let rest in a large bowl.

Add the remaining olive oil and begin sauteing the onions for 2 min. Add in the garlic and bell pepper and saute another 2 mins. Then toss in any other woody veggies  (broccoli, asparagus) saving the tomatoes until the very end.
When everything is cooked, combine the veggies with the chicken in your big bowl.
2 tbsp. butter
In the same pan you cooked the chicken and veggies in, melt the butter over medium heat. Toss in the flour and stir, cooking 1-2 minutes.
Slowly add in the half and half while stirring to prevent any clumps from forming.  Sprinkle in the red pepper flakes and allow to simmer until you see boiling action.  Stir periodically.
When your sauce begins to thicken and bubble, turn off the heat and add in your cheese. Stir until melty.
To assemble everything I like to add the pasta first so it gets nice and coated with sauce and then pour the rest of the goodies in.