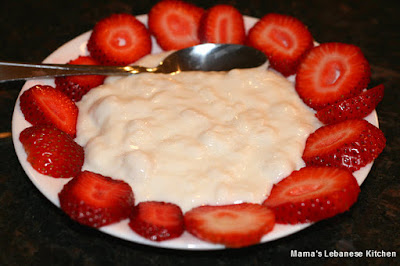 What is Ashta (Kashta)?If you’re familiar with Arabic and Lebanese sweets, you would know that “Ashta” is a major ingredient and is considered as the king of fillers.  Ashta is a slang word for “Kashta” in classical Arabic, which refers to clotted cream prepared with rose water and orange blossom water. Ashta is used as a filler in desserts such as Knefeh (kunafa), Znood el Sit, Atayif (Katayif) and in many others. It is also served on top of fruit cocktails.Original Ashta vs Modern AshtaThere is more than one method to make Ashta. In modern times, chefs  hacked their way into a cheap shortcut whereby Ashta is made with boiled milk, corn flour and bread. This is not bad, and it’s cheap to make.  However compared to the original recipe it doesn’t stand grounds.The original Ashta recipe is prepared purely with milk (preferably raw), and is therefore more expensive to make. The reason is that depending on how fatty the milk is, you may get just one table spoon of Ashta for each cup of milk. Whereby in the “hacked” method you get almost one cup of Ashta for one cup of milk.The original Ashta method is quite simple to make though. Using raw milk, or supermarket whole milk mixed with half and half (milk and cream), bring them to a boil while stirring, lower the heat, squeeze a few drops of lemon juice. As soon as the milk starts to clot, add the rose water and orange blossom water, and start scooping out the Ashta/clotted cream from the surface into a separate strainer… That’s it.Once the Ashta cools down, you can use it as filler in Arabic sweets, or you can serve it with fruit cocktails garnished with honey and nuts.Author: Esperance SammourPrep time:  5 minsCook time:  15 minsTotal time:  20 minsLearn How to Make the Original Ashta Dessert, Clotted Cream With Rose Water Like a Pro.Ingredients3 cups of whole milk (preferably raw)3 cups of half-and-half (milk with cream)½ teaspoon of rose water½ teaspoon of orange blossom water½ teaspoon of freshly squeezed lemon juicea pinch of sugar (opional)Instructions

NotesAshta requires refrigeration so it doesn’t spoil. It can last 2-3 days in the fridge.