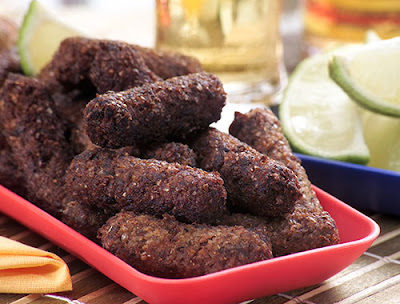 1- In a food processor, process the meat with the bulgur and onion.
2- Season with salt, black pepper, cinnamon, dried mint, all spice and cumin. Mix well until combined.
3- Knead the ingredients using hot sauce until the meat dough is homogenous.
4- Divide into medium-sized ball and shape into fingers.
5- Preheat the grill and oil it evenly.
6- Grill the kibbeh until done.

Note: Allspice is a mixture of spices and herbs widely used in the Middle Eastern cuisine. It can be prepared easily at home from different spices such as: cinnamon, cloves, black pepper, dried lime and curcuma. Use it to enrich your savory dishes!